Since the recovery phase in global industrial activity levels began in May 2020, commodity prices in 24 months increased in dollars by 157%.
For most commodities the price level is now significantly above the considered equilibrium levels. It is very likely that, now, the ongoing slowdown in world industrial production will lead to a downward adjustment in prices. Some prices already signal this re-equilibrium phase. In particular, the prices of non-ferrous metals listed on the financial markets of London and Shanghai have already begun, since the end of April, to register a path of recovery.

The uncertainty no longer concerns the direction but the intensity of the probable reduction in prices. How much will prices fall in the coming months?
To answer this question, it is necessary to investigate the nature of the determinants that have led prices to reach current levels.
The many factors underlying the increase in the prices of the various raw materials can be traced back to two broad categories, which for simplicity we indicate with the terms "Supercycle" and "Just in case".

The term "Supercycle" refers to what happened in the first decade of this century when globalization and, above all, China's entry into the WTO and its industrial development led to a sharp increase in world consumption of raw materials. As increased consumption began to appear evident, financial markets anticipated the effects on prices of the expected higher demand, leading to a very pronounced and concentrated price increase in a relatively short period. Between the beginning of 2003 and the beginning of 2007, the prices of non-ferrous metals, for example, increased by 184%, not justified by the increases in demand that took place in the four years, but fully justified by those that would have occurred in the following years.
The article Energy transition and world demand for metals describes the motivations that lead many analysts judge recent increases in many commodities as the start of a new super cycle.

The "just in case" orientation is an alternative to "just in time" in inventory management. The term "just in time" indicates both a procurement system in which only the strictly necessary is purchased, and a production system driven by sales, as an alternative to the model that provides for the storage of the goods produced, waiting to be sold . The objective of this management method is to reduce costs and possible waste due to the accumulation of stocks of materials and finished products. The actual benefits it produces are inversely proportional to the uncertainty affecting demand and supply. If this uncertainty exceeds a certain level, then just in time does not produce more efficiency but only more costs.

With the outbreak of the pandemic, uncertainty about supply and demand has increased considerably, prompting many companies to abandon "just in time" in favor of "just in case". This second approach aims to ensure the availability of materials and the active management of the variability of demand, guaranteeing deliveries to its customers. The higher the uncertainty, the greater the positive results that a company achieves thanks to "just in case".

Supercycle or Just in case

It is possible to have an idea of the importance of the two types of determinants, considering the price dynamics of three commodity indices: 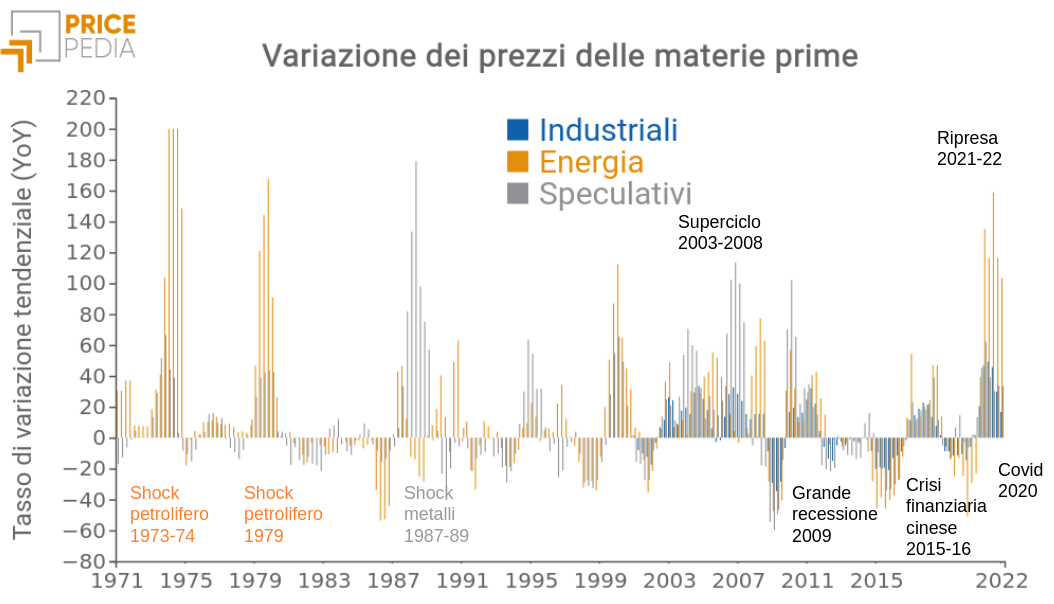 The graph shows the most significant periods of the 50 years considered. In the last century, the two oil shocks (in 1973 and 1979) and the shock that affected metal prices in 1987-89 are particularly evident.
At the beginning of the new century, the period in which it took place is evident a super cycle, with a long period in which all the three indices considered here have registered significant increases. The super cycle ended with the Great Recession of 2009, which was followed by a rebound in 2010-2011 that quickly brought prices back above pre-recession levels.
The chart also highlights the effects of the 2015-2016 Chinese financial crisis and the subsequent rebound. In more recent years, the fall in prices in the most acute phase of the pandemic and the subsequent strong recovery have emerged. It is the analysis of the recovery of 2021-2022 that can provide us with indications of what the intensity of the next rebalancing in the prices of raw materials may be.

The recovery in prices in the last two years has been characterized by the sharp rise in energy prices that brings it closer to the oil shocks of the 1970s. An equally significant element is the substantial equality between the dynamics of “speculative” prices (which reflect the Supercycle component) and the dynamics of industrial prices (which reflect the just in case component). It is the importance of this component in the phase of price growth that should determine the intensity by which the average prices of raw materials and basic goods will readjust in the near future.

The analysis of the components that have determined the strong growth in raw material prices in the last two years leads us to believe that the next downward price adjustment may not be marginal.

Fundamentals of the gas market

To study the possible future evolution of prices, a specific analysis of the various determinants is necessary [ Read all ]

Signs of optimism from copper price, but recession risk remains on the scene