For several months now, commodity prices have been on an upward path, recording historically high levels. This has led many analysts to talk about a new super cycle in commodities.
In an ordinary cycle, prices increase when demand increases: producers of raw materials then increase production until supply is able to satisfy and exceed demand, such that there will then be a decrease in price. On the other hand, when it comes to the super cycle, supply over an extended period fails to meet demand, so prices continue to rise steadily.
Among the protagonists of this super cycle, there are non-ferrous metals mainly projected into the path of energy transition.
The goal of the energy transition is in fact to gradually eliminate the use of fossil fuels and improve energy efficiency, using more and more "clean" sources.
The graph below shows the trend of the non-ferrous metals index, which in April 2022 reached a record level of 174, recording a change of + 80% compared to June 2020.

With the development of renewable sources and the spread of electric cars, the demand for metals essential to the implementation of the various green technologies will grow, from wind turbines to photovoltaic panels, passing through batteries and other components of green systems and infrastructures.
Copper, zinc, lithium and cobalt will be decisive for the development of renewables, green mobility and energy storage.
Therefore the consumption of these metals will increase strongly. According to a study, an offshore wind farm 1 requires 17 times more metals (including copper) than a gas-fired power plant of the same capacity, an onshore wind farm eight times more and a photovoltaic park nine times as much. more.
Copper is also a key component in the energy transition: while a natural gas plant needs one ton of copper to produce one MW of electricity, according to the International Energy Agency (IEA) it takes twice as much to produce the same amount of energy with wind and three times as much for photovoltaic panels.
The same goes for electric vehicles, which require three to four times more copper than internal combustion vehicles.
The other metals considered here (lithium, cobalt and nickel) are involved in energy production and storage. Their consumption is similarly destined to grow with the development of renewable energy and electric vehicles, with the production of lithium batteries.
Copper, nickel, cobalt and lithium are therefore directly involved in the energy transition. In the paper “Energy Transition Metal” of 2021, the International Monetary Fund quantifies the impact of the energy transition on the prices of these metals. 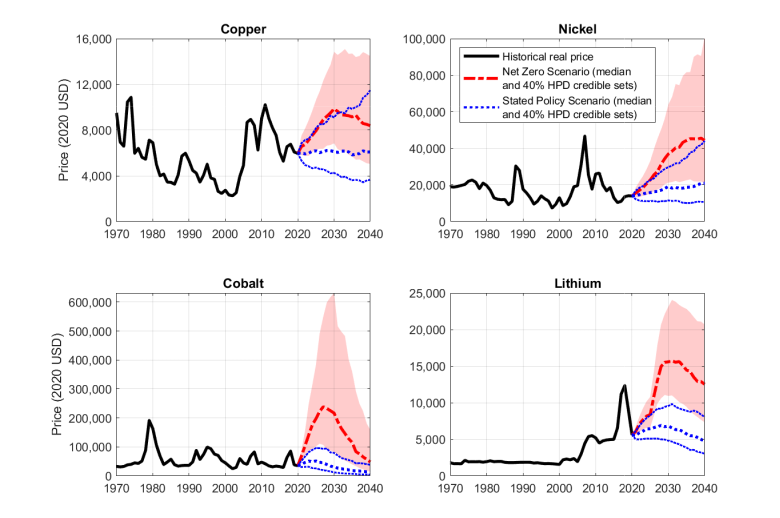 In the "Zero Emissions" scenario, identified by the red curve, the boom in demand for these metals could lead to a price in 2030 of $ 11 thousand / ton for copper, $ 40 thousand / ton for nickel, $ 220 thousand / Ton for cobalt and $ 16,000 / ton for lithium. These values are expressed at constant 2020 prices, so the actual price will be increased by US inflation, which can be estimated at over 25% over the decade.
The above prices are significantly higher than those currently quoted. However, the hypothesis of a "Zero Emissions" scenario is unlikely, although this must be taken into consideration.
The alternative hypothesis shown in the graph (blue lines) considers a scenario in which current energy policies will not be significantly changed. In this "real estate" scenario, the price of copper in 2030 would be close to $ 7,000 / ton, nickel to $ 19,000, cobalt to $ 100,000 and lithium to $ 7,000. For copper and nickel, these prices are lower than those implied in current futures contracts for the two metals.

The financial markets seem to price the future values of copper and nickel considering an intermediate scenario between the “real estate” and the optimistic “Zero Emissions” scenario. This implies that the financial markets are betting on a change in the current energy policies of the main industrialized countries, aimed at approaching the "Zero Emissions" scenario, but not such as to reach this goal in 2030.
It is evident that delays or accelerations in the modification of these policies will result in a decrease or increase in the long-term prices implicit in the futures contracts of the metals most involved in the energy transition.

1. In energy engineering, the term offshore wind refers to the use of wind farms built on water.